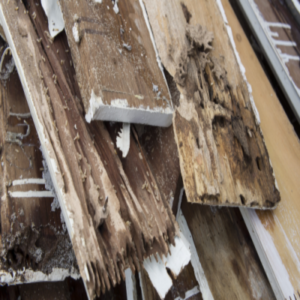 The introduction and spread of Formosan subterranean termites (Coptotermes formosanus Shiraki) (FST) in the southern United States have increased the need for preservative treatments to protect wood products from termite attack (Shupe and Dunn 2000). Of particular concern is the protection of framing lumber used in residential and commercial structures. Because of their large colony sizes and aggressive foraging patterns, FST are considered to be a greater threat to wooden structures than the native (Reticulitermes spp.) termites (Shupe and Dunn 2000). The FST are also thought to be somewhat more resistant to some types of wood preservatives, although this has been difficult to quantify.

The preservative most commonly used for treatment of framing lumber is disodium octaborate tetrahydrate (DOT). Numerous researchers have evaluated the efficacy of DOT in protecting wood from termite attack (Drysdale 1994; Grace and Yamamoto 1994a; Grace et al. 1992; Preston et al. 1996; Preston et al. 1986). On the basis of these studies, borates have been standardized for interior treatments at retentions of 2.8 kg/m3 for areas with native subterranean termites and 4.5 kg/m3 (as B2O3) for areas with FST (AWPA 2003). Less information is available on the concentrations of other types of borate systems, such as those based on borax, needed to prevent attack by FST. However, whether B2O3 equivalents are an appropriate measure of the termiticidal properties of a borate compound is unclear.

The solution chemistry of borates is complex (Eisler 1990) and multiple boron species likely exist within the treated wood.  Previous researchers have also reported that wood treated to relatively high DOT retentions may sustain some attack or “browsing” by FST (Grace et al. 1992; Grace et al. 2001; Grace and Yamamoto 1994a; Preston et al. 1996). Some feeding may occur because borates are not termite repellants, and the toxic effects are not immediate (Grace et al. 1992). However, Grace and Yamamoto (1994b) have also attributed this attack to localized variations in DOT retention within the wood substrate.

This latter finding raises the concern that framing lumber not completely penetrated with preservative may be vulnerable to FST attack. Whereas much of the framing lumber used in the southern United States is southern pine, a species group with easily treated sapwood, a substantial portion of the framing market is supplied from the Spruce–Pine–Fir (SPF) species group. (When considered in its broadest terms, the SPF species group includes subalpine fir, balsam fir, jack pine, lodgepole pine, red pine, black spruce, Engelmann spruce, red spruce, Sitka spruce, and white spruce.) The SPF species are generally considered to be difficult to treat (refractory) or variable in their treatability (Gjovik and Schumann 1992; Richards and Inwards 1989; Smith 1986).

Recent studies have found that DOT penetration in these species is greater than that experienced with CCA (Baker et al. 2001; Lebow et al. 2005), and that treatability with a borax-based preservative is intermediate between CCA and DOT (Lebow et al. 2005). Current treatment standards, however, require preservative penetration of only 10 mm in SPF species (AWPA 2003), and researchers are concerned that construction activities will create breaks in the treated shell and expose the untreated core to termite attack.

This study evaluated the relative ability of three types of wood preservatives to inhibit attack by Formosan subterranean termites (FST) (Coptotermes formosanus Shiraki) and native subterranean termites (Reticulitermes spp.). The study also evaluated the roles of preservative retention and penetration in preventing termite damage. Sections of boards from six wood species within the Spruce–Pine–Fir species group were pressure-treated with one of four concentrations of a borax–copper (BC) preservative composed of borax (sodium tetraborate decahydrate) technical copper hydroxide or one concentration of disodium octaborate tetrahydrate (DOT) or chromated copper arsenate (CCA). Specimens were cut after treatment, exposing untreated end-grain in specimens not completely penetrated by preservative. The specimens were exposed above-ground, protected from the weather, at a site with populations of both native and FST near Lake Charles, Louisiana. Specimens were rated for extent of termite attack after 6, 12, and 24 months of exposure. Attack by FST was more severe than that by native termites for all preservative treatments, although this difference was less obvious at higher preservative retentions. For all treatments, termites preferred to attack the center of the end-grain of the specimens where preservative was either absent or at a lower concentration. However, CCA, which had the lowest overall penetration, was more effective than either borate preservative in preventing attack, whereas some DOT- and BC-treated specimens suffered attack even with what appeared to be complete boron penetration.

These results indicate that the efficacy of shell treatments in preventing termite attack is a function of the type of preservative. The BC wood preservative protected wood from both native and Formosan termite attack at B2O3 concentrations equivalent to or lower than that of DOT treatments.